As Gilda Radner once said, “…dogs are the most amazing creatures; they give unconditional love. For me, they are the role model for being alive.” You’ll never know when (or which) dog might be the one that impact your life in ways you would never expect. Sometimes, it also happens the other way around! This is exactly what happened when a little stray dog decided to follow a marathoner for over 20 miles in a cross country race. This a story of heart, human-canine bonding, and the type of unconditional love dogs are known for. 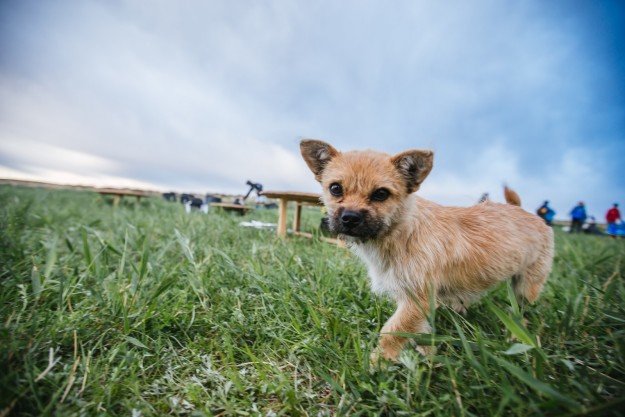 Gobi, the small dog that traveled over 77 miles to find her best friend. (4Deserts.com / Onni Cai)

It all began during the 4 Desert Race in the Tian Shaun mountain range on March 2016, a 6-day foot race that weaves 155-mile through China’s longest-spanning desert. At the start of the race, a homeless dog decided to join the 101 human participants and trotted along besides various runners for the entire 22-mile stretch. Dion Leonard, 41, an extreme marathoner from Australia that has raced all over the world, had noticed the short-haired pup back at the runner’s camp on the first day; but did not think much of it at the time. On Day 2 of the event, she was at the starting line again—this time by Leonard’s side and looking up at him. “I thought to myself this little dog isn’t going to last very long at my side as we raced off, but she ended up running the whole day and 23 miles distance.” Even climbing over a 2,000-foot mountain with him, the dog followed Leonard all the way back to his tent at the camp base, and laid down next to him—growling lightly at anyone that came too close to Leonard without her approval. “And that was that — a bond had been developed,” he said. In honor of the race, Leonard named his new companion “Gobi” who quickly became the mascot of the race. Both, organizers and competitors snapped photos and posted online about Gobi in racing blogs and emails to friends and families.

Day 3 was no different. Again, Gobi followed her new best friend along for the 26-mile stretch. However, she had to miss Day 4 and 5 of the race because the weather was deemed too extreme as it stretched through the Gobi Desert and temperatures soared above 100 degrees. However, Gobi was transported in an air-conditioned vehicle with event organizers to the ending point so that she would be there to greet Leonard as he came in.

Gobi was the best dog you could imagine — no barking, no biting, no chewing on things, no rooting through bags or stealing socks. Richard Henson, fellow participant who shared a tent with Leonard

On the sixth and final day, Gobi was back in the race. Describing himself as an extremely competitive person, Leonard said he lost time because he had to carry Gobi across several rivers that were too wide for her to swim across. “I had to literally just grab her and hold her in my arms, as I’m trying to win this race. The other guys are just roaring past me and I’m tip-toeing on the rocks so I don’t drop her,” he said. He lost additional time on the last day of the race because he stopped to save a competitor that was overcome by the heat. “It can be life or death out there,” Leonard said. Death from heat stroke is not uncommon. As such, he stayed with the runner until help arrived. As a result, he lost his first place opportunity; but managed to finish the race in second place together as a team with Gobi. 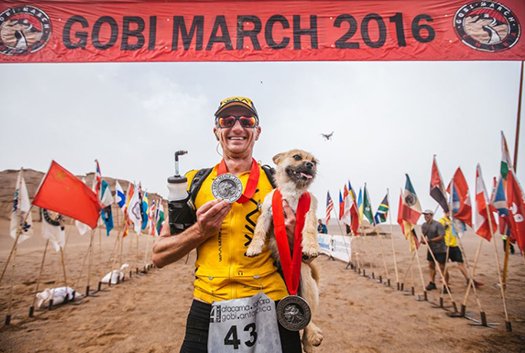 All together, Gobi ran more than half of the 155-mile race—no small feat for any dog. Leonard, who currently resides in Scotland, is hoping that he can continue journeying with Gobi for even longer. However, getting a dog cleared for entrance into the United Kingdom is a long and expensive procedure, requiring thorough veterinarian medical examinations and a 4-month quarantine. Despite the challenges, Leonard is committed to adopting Gobi. He left Gobi with a trusted friend in China and have began the process so that the two can ultimately be reunited once again. Currently, hundreds of donors have already volunteered to help cover the expenses of bringing Gobi back ‘home’. For now, Gobi is living with one of the race organizers in the village of Urumqi.

Gobi picked me to be her pal for life, so I am doing what I can with some great support from around the word to make this happen. Dion Leonard