Trending
Thanks to 3D printer, Derby, a rescue dog born with deformed front legs and unable to walk, is now happily running around thanks to his new prosthetic legs developed as a collaboration between 3D Systems and Animal Ortho Care.

Other than having underdeveloped front limbs from birth, Derby was an otherwise healthy dog. Unfortunately, this was the reason that his owners could no longer care for him. Luckily, he eventually found his way to Peace and Paws Dog Rescue in Hillsborough, New Hampshire where Tara Anderson, 3D Systems’ Director of CJP Product Management, eventually adopted Derby as a foster mom. 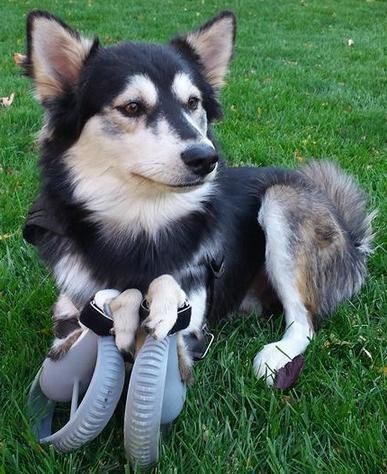 I kept looking at his photo, and hearing his story, and I cried literally every time…I had to try and help this dog.
Tara Anderson, Derby’s foster mom and 3D Systems’ Director of CJP Product Management

Unsatisfied with the initial cart that she provided Derby with, Tara searched for alternative options that would not inhibit him from playing with other dogs and would allow Derby to experience the full motion of running like his other canine friends. With the help of her company, 3D Systems, Kevin Atkins (3D Systems’ Freeform Product Manager), and Derrick Campana (ABC Certified Orthotist) at Animal Ortho Care; the team developed a unique set of prosthetic legs after creating several different prototypes.

Fitted with his new gifts, Derby immediately started running, almost as if he was born for these legs. It is outstanding to see the impact 3D printing technology has had in our society in the past few years. As with humans, this technology has proven to have the capability to enable both individuals and creatures to do things they would have never thought possible previously. Thanks to the volunteers at 3D Systems, Tara Anderson, the Portanova family, and expertise of Derrick Campana for helping our furry friend Derby!

To learn more about Derby and his story, check out the original article at 3D Print Systems.